The structural composition and physical and chemical properties of graphite

Graphite is a transition type crystal between atomic crystals, metal crystals and molecular crystals. In the crystal, the carbon atoms in the same layer are sp2 hybridized to form a covalent bond. Each carbon atom is connected to three other carbon atoms. The six carbon atoms form a regular hexagonal ring on the same plane and stretch to form a sheet structure. . The carbon atoms in the same plane still have a p orbital each, they overlap each other, and the delocalized π-bonded electrons can move freely in the lattice and can be excited, so graphite has metallic luster, can conduct electricity and transfer heat. Due to the large distance between the layers and the small bonding force (Van der Waals force), each layer can slide, so the density of graphite is smaller than that of diamond, soft and smooth. 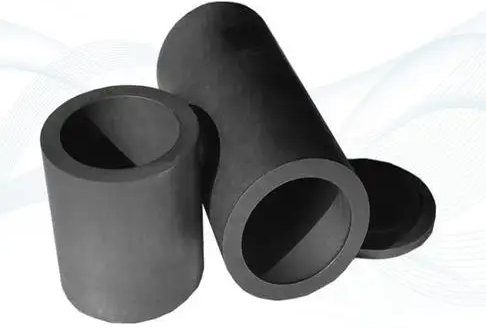 The distance between each layer of graphite is 3.40Å, which is combined by van der Waals forces, that is, the layers are molecular crystals. The distance between carbon atoms in the same layer is 1.42Å, because the carbon atoms on the same plane layer The bond between them is very strong and extremely difficult to break, so the melting point of graphite is also very high and the chemical properties are also stable. In view of its special bonding method, it cannot be regarded as single crystal or polycrystal alone. It is now generally considered that graphite is a mixed crystal.

Graphite belongs to the hexagonal crystal system with complete layered cleavage. The cleavage surface is dominated by molecular bonds, which have weak attraction to molecules, so its natural floatability is very good.

Graphite is soft, dark gray, greasy, and can stain paper. The hardness is 1-2, and the hardness can increase to 3-5 with the increase of impurities in the vertical direction. The specific gravity is 1.9 to 2.3. The specific surface area is concentrated in the range of 1-20m2/g, and its melting point is above 3000℃ under the condition of isolating oxygen. It is one of the most temperature-resistant minerals. It can conduct electricity and heat.

There is no pure graphite in nature, which often contains SiO2, Al2O3, FeO, CaO, P2O5, CuO and other impurities. These impurities often appear in the form of minerals such as quartz, pyrite, and carbonate. In addition, there are gas parts such as water, asphalt, CO2, H2, CH4, and N2. Therefore, in the analysis of graphite, in addition to measuring the fixed carbon content, the volatile and ash content must also be measured at the same time.

Graphite and diamond, carbon 60, carbon nanotubes, graphene, etc. are all simple substances of carbon, and they are allotropes.